Do you know the difference between a DUI and BUI? 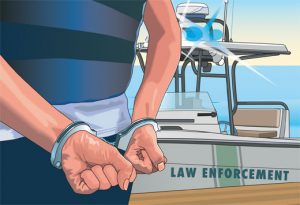 Florida is a boater’s paradise. With the open ocean, intercoastal waterway’s, and sprawling lakes Florida accommodates all types of boating enthusiasts. Just because a person is behind the wheel of the boat doesn’t mean they are not subjected to similar alcohol criminal offenses.

What is a BUI?

Under Florida statute 327.35 it is a criminal offense to boat under the influence of drugs or alcohol. If you have a blood/breath alcohol level of .08 or higher, or your boating to the extent that your normal faculties are impaired you can be found guilty of BUI.   In addition, if you are under the influence of controlled substance (ie drugs) you can also be found guilty of BUI.

The BUI statute is similar to the DUI statute 316.193 as to what the state has to prove.   Both offenses are misdemeanors for a first offense, unless someone is injured in the offense. Both have increased penalties for subsequent convictions.   A post require probation and a BUI will require attendance at a substance abuse course. The court will also impound the vessel for 10 days similar to the DUI statute which requires a ten-day immobilization.

Under Florida statute 327.35215, a person who is lawfully arrested for BUI refuses to submit to a blood breath or urine test is subject to a civil penalty of $500, for the first offense. Like a DUI this refusal can be used against you in court. Unlike a DUI, this first refusal will not end in the suspension of your driver’s license. If the defendant has refused to take a test, you can within 30 days petition to have a hearing before the court to determine whether it was a lawful refusal.

While DUI and BUI may be similar, it is much easier for law enforcement to have contact with someone on a boat as the Coast Guard and law enforcement have a right to do equipment checks just about any time. This means law enforcement has an opportunity to view and inspect the driver and his or her condition without reasonable suspicion. Be careful out on the water do not put you, your guests, or other boaters in harms way.