The Difference Between Domestic Battery and Domestic Violence 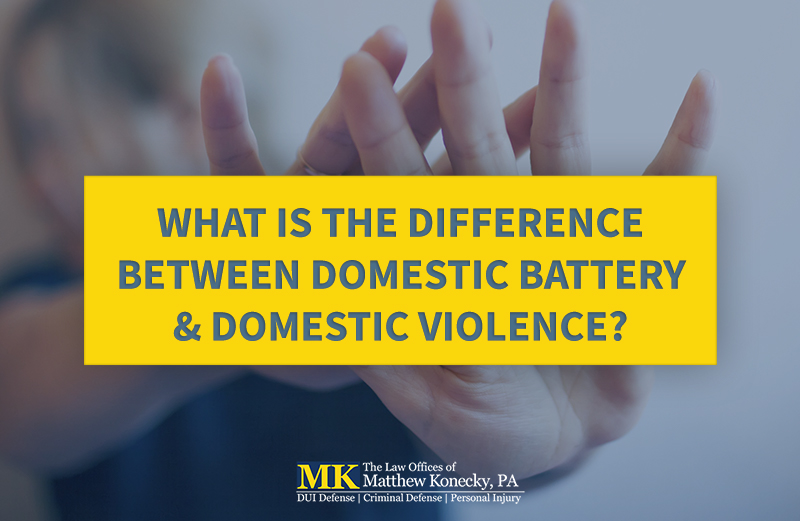 Under Florida law, domestic violence is any assault, battery, stalking, false imprisonment, or criminal offense that results in the physical injury or death of a member of the family or household. According to the Florida Department of Children and Families, in 2019, 105,298 crimes of domestic violence were reported to Florida law enforcement agencies resulting in 66,069 arrests. It's important to know that Florida courts view domestic battery or domestic violence as one of the most serious allegations against a criminal defendant. If you have been accused or charged with a domestic violence-related crime, contacting a West Palm Beach domestic violence defense lawyer can ensure your rights are vigorously protected.

What is Domestic Violence in Florida?

While Florida Statute 741.28 defines domestic violence as any criminal offense resulting in the physical injury or death of a household member, it can be much more extensive. Domestic violence charges can also include sex crimes, kidnapping, or even stalking depending on the case.

Domestic violence-related convictions in Florida can often come with penalties including:

What Falls Under Domestic Violence in Florida?

Domestic violence is an umbrella of various multiple forms of brutality against a family member or significant other within a household.

While it is common for individuals to confuse assault and battery as the same crime, they are two separate convictions with varying penalties. Surprisingly, physical contact or injury is not required to be charged with assault. Florida Statute 784.011 defines assault as the threat of violence. An example of domestic assault is intending to cause an apprehension of harmful or offensive contact or an act that causes apprehension in a victim that contact is imminent. Simply threatening violence towards family or a significant other can lead to a second-degree misdemeanor, up to 60 days in jail, and a $500 fine. In order to be charged with assault, the State must prove that the defendant actually intended to commit the act which put the victim in fear of a violent attack. Having an experienced Palm Beach County domestic violence attorney on your side can minimize the potential consequences or potentially have the charges reduced.

If an individual threatens someone with the use of a deadly weapon, an assault charge can be increased to aggravated assault. A deadly weapon is defined as any device that can inflict fatal or serious injury. Deadly weapons in Florida can include but are not limited to:

If you or a loved one are facing domestic violence charges, The Law Offices of Matthew Konecky can help. For over 18 years, our highly experienced Florida domestic violence lawyer has been defending hundreds of individuals facing domestic-related charges. Contact us or call us at (561) 671-5995 to speak with a lawyer immediately. We've also written a free guide for anyone affected by domestic violence titled 'What to Do If You or Your Loved One Has Been Arrested for Domestic Violence'.