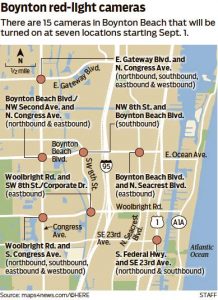 Since I’ve been writing this blog we’ve been talking about the endless saga of the constitutionality of red light camera tickets.   For those who have been in the dark, red light camera tickets started approximately 10 or so years ago. Municipalities placed cameras at specific intersections that recorded all traffic. Upon someone entering an intersection without stopping at a red light picture was taken of the driver’s vehicle. Then a ticket would be issued to the driver called a “Notice of Violation.” This “Notice” was not a ticket but a chance to pay the city directly for the violation without it notifying the DMV.   The upside was no points on your license. The downside was the government watching our every move and enacting a fine procedure without having to prove the case.

The alternative to paying the fine was the city would then issue a uniform traffic citation. This citation was a real deal ticket. If you failed to pay the ticket or appear in court, it would have an effect on your license.

BOYNTON BEACH IS BACK AT IT

If you get a red light camera Notice of Violation the first thing you need to do is find out if you actually ran the red light.   Each notice of violation has a link for you can actually watch the video to see if you answered after the light turned red. If you did not, you should fight the ticket.

What if you weren’t the one driving and you were issued a ticket? There is a remedy for that. What you have to do is fill out an affidavit stating it was not you, however you will have to identify who was driving. Ultimately they may get a notice of violation, and a ticket.

If you are issued a uniform traffic citation contact our office as we may be able help you. While tickets are not our bread and butter, we have helped hundreds of our clients with traffic matters throughout the years.